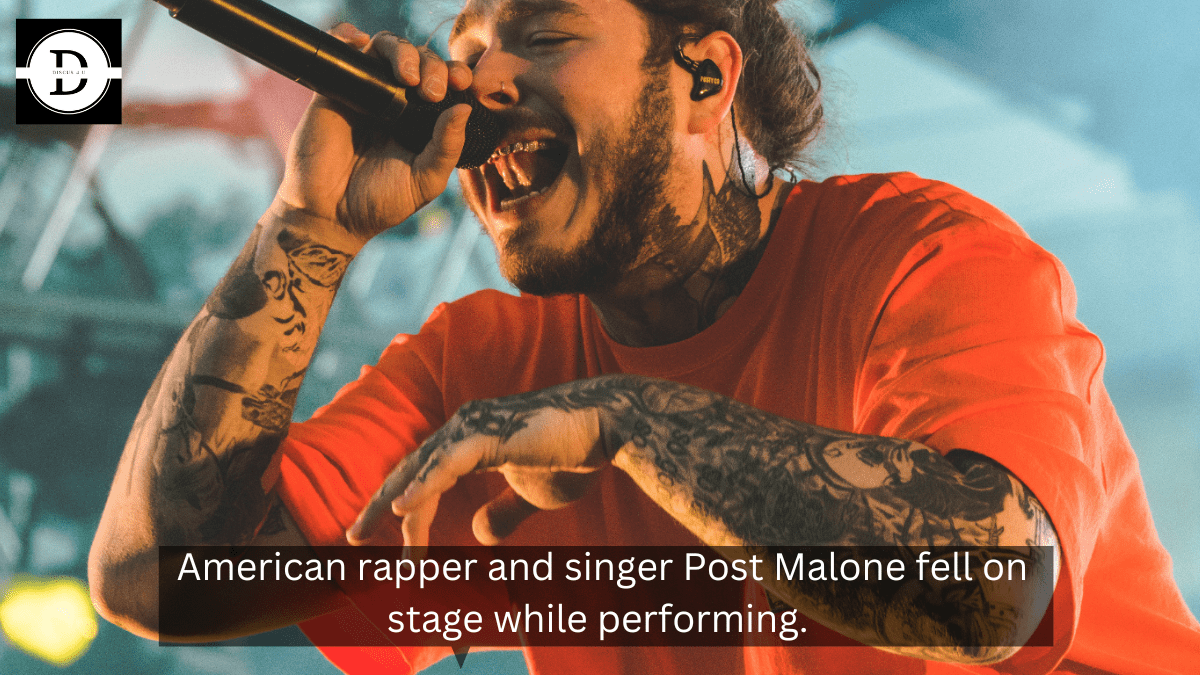 Rapper Post Malone fell on the stage and hurt himself which led him to have bruises around his ribs on Saturday while he fell through an hole on the stage during his performance in St. Louis City in Missouri.

Post Malone had a major fall while performing his song “Circles” in the middle of his concert in St. Louis on Saturday night. The accident occurred about an hour after his performance started. Malone was walking down a ramp when he stepped into a hole which had been there to lower his guitar which by the way wasn’t covered.Now Malone who clearly didn’t notice this while performing hit the floor in with a great force that resulted in his face and entire body falling to the stage floor , now after the incident immediately his staff ,Medics and security guards rushed to him while the audience was still cheering his name Soon to realise the hardness of the incident that took place, however, audience then became quiet as the music stopped suddenly.

The rapper who was on stage and in pain screamed while continuing to lay on stage .You could clearly see in his face and body how much pain he had to go through. His legs were trembling from the pain but his song was still playing in the background.

A few minutes later, the singer managed to get up and leave the stage with assistance from the medics and his team . He assured to his fans that he only needed “three or four minutes” backstage to get himself back together.

Now after sometime the rapper returned to the stage and said “I want to thank you for your patience, and I’m sorry there was a big-ass hole in the stage,”

The rapper still continued performing despite all that had happened.

While some of his fans claimed that he cracked three ribs and was “hurting so bad he was crying during performing.

On September 18, 2022 malone took to Twitter on Sunday and thanked fans for their patience and for putting up with his dumb ass and further elaborated on how he busted his ass. He further informed everyone that he just got back from the hospital, and everything’s good.

he said “They gave me some pain meds and everything, so we can keep kicking ass on the tour.”

The gracious rapper added that the next time he visits St. Louis, he’ll make a longer show for the audience and that he would “make up for a couple of the songs that he missed .”

Malone’s manger thanked everyone for all thier well wishes and said that Malone didn’t break 3 ribs last night thank god. But the rapper’s manager, Dre London, had written on Instagram on Sunday. “We did X-rays at hospital after the show & they declared that he had bruised his ribs”.

Any artist like him truly deserve all the love . While all this happened the internet and fans took this incident by strom wishing Malone for his speedy recovery and that it broke their heat to see their idol in pain

Some saying “Hope your okay Malone st. Louis loves you”

Did you know Why do people leave their luxurious life in the US and go back to India?